More than 100 delegates attended a conference at the The Curve, Prestwich, on 20 March, which included speakers from across the country and families who have lost relatives to suicide.

Meanwhile, a report by the House of Commons Health Committee, focused on the Mental Health Liaison Team at Salford Royal Hospital and their work in suicide prevention.

The report followed a visit to the hospital by the committee, which took place on Monday 14 November 2016.

The report states: “The Committee heard about the achievements of the team. Admission rates for patients with mental health problems had halved at Salford Royal from 15.8% to 8.8%. 95.4% of patients were seen and discharged within 4 hours.”

The full report can be downloaded HERE.

The report was among many things up for discussion at the conference, which offered an opportunity for front line staff to come together to hear key speakers talk about areas for action to reduce suicides, particularly among those under the care of mental health services. 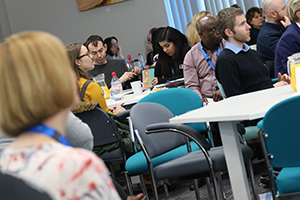 Julie Bodnarec, GMMH’s Assistant Director of Clinical Governance, and the event organiser, said: "The conference was a huge success with staff and families feeding back how the event, and the individual families’ experiences in particular, had inspired them."

At the end of the event each delegate agreed an individual pledge of action, to make a difference in their service areas and improve service user safety, in response to the Suicide Prevention Agenda.

The Trust has agreed to liaise with individual staff over the coming weeks to follow-up these pledges and see how staff have taken these forward within their services.