On The Front Foot, Cloughside College | News and Events 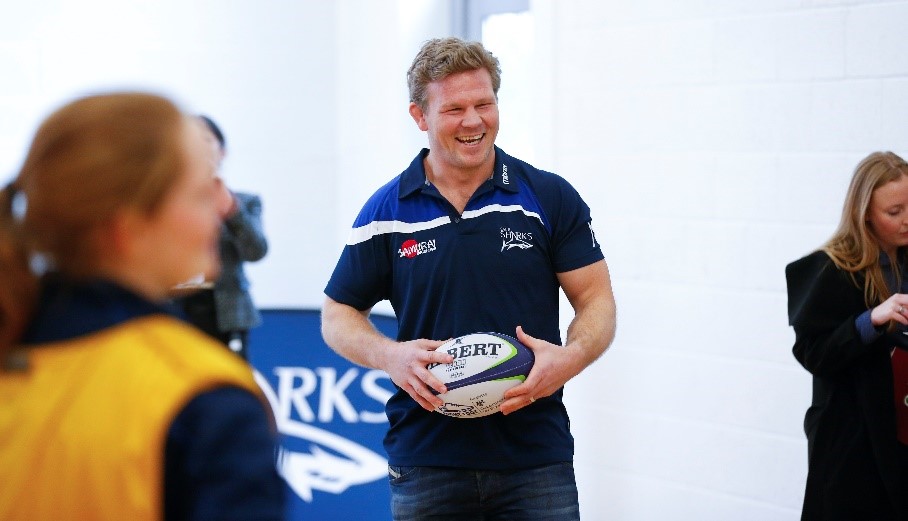 Over the past six weeks Sale Sharks Rugby Club has been visiting Cloughside College based at the Prestwich site to deliver a training programme called ‘On The Front Foot’.
‘On The Front Foot’ is a Department for Education funded initiative which combines interactive classroom activity and training field fun to instil rugby values among young people about to take the next step in life.
Sales Sharks agreed to deliver ‘On the Front Foot’ at the Trust after being contacted by Gary Roberts, Sale Sharks season ticket holder and the Trusts Logistic Manager. When asked what prompted him to invite Sale Sharks, Gary said:
‘When witnessing a speech given at the Gardener Unit / J17 back in December by injured war veteran Ben Parkinson, I saw that it had a very positive impact on the service users. After this I thought it would be great if Sale Sharks could arrange a player visit to try and replicate the same positive impact.
“To my surprise they agreed to deliver ‘On the front foot’, for the first time in a mental health hospital, a real national game changer for premier rugby.
“Going the extra mile was really worth it to see the positive impact it had on the service users.”
On Friday 12th February Sale Sharks captain Dan Braid helped deliver the programme to Cloughside College.
Sharks have been working with Cloughside College, which has students enrolled from J17 and The Gardener Unit, for the past six weeks.

“We saw a couple of groups of kids and they are all really enjoying it – you could see those rugby values having a positive influence.

“It has been great using the values that rugby has, getting the players out and interacting with the kids, getting into the community and helping out.

“The community guys we have at Sale are great – they always make sure they get the players who are available to go and help out.” said Dan Braid, Sales Sharks captain.
Farzana Shah, Cloughside College Head Teacher, was overwhelmed by the support Sale and Premiership Rugby have provided.

She said: “It is fantastic to have the Sale Sharks players in working with our young people and it has been a brilliant way to end the half term.

“The work they have done has improved the children’s resilience and sportsmanship and over the six-week programme the kids have blossomed. It is amazing – everyone, even young people who might not necessarily have taken part in sports, have joined in.”