A mural to stimulate local memories for patients with dementia was officially unveiled by Rt Hon Hazel Blears on Wednesday (12 October).

The mural and artwork was inspired by the local areas of Bolton and Salford where the majority of patients staying at the hospital are from to evoke memories and conversation about local landmarks.

It was launched by former MP for Salford and Eccles, Rt Hon Hazel Blears, who is the Chair of the Institute for Dementia’s External Advisory Board and a trustee of the Alzheimer Society.

Ms Blears, whose late mum, Dorothy, attended patient groups run at Woodlands Hospital, said: “It is really important to improve the physical environment of care for people with dementia in hospital. Focussing on the design of a hospital environment can significantly help in compensating for sensory loss and cognitive impairment as well as contributing to supporting independence.

“By working with ground-breaking charities like Start, as well as patients and carers, GMW have been able to improve Woodlands Hospital environment by focussing on areas that really matter to people with dementia.

“My mum loved to paint and draw and looked forward to her art workshops with Start. Access to these sorts of workshops, along with Artist in Residence schemes, is really important as engaging people with dementia in art improves mood, gives them a sense of focus and deepens connections with other people as well bringing respite and joy into their lives.”

Manchester based designer, Tim Denton, held art workshops with patients and their families, staff and volunteers to gain ideas for the work. The final mural is a compilation of different buildings and scenes from Bolton and Salford.

Photographs of Bolton and Salford were taken by Sian Roberts, a professional photographer and former member of Start in Salford, who went out into the landscape to capture the ideas that came out of the workshops. Patients and their families choose from over 100 photos and the final selection is on display in the main corridor at Woodlands Hospital and on Hazelwood ward.

Peter, from Swinton, was diagnosed with dementia in 2014 and is a member of the Trust’s Open Doors Service, which supports people living with dementia and their families and aims to develop and innovate dementia services in Salford. 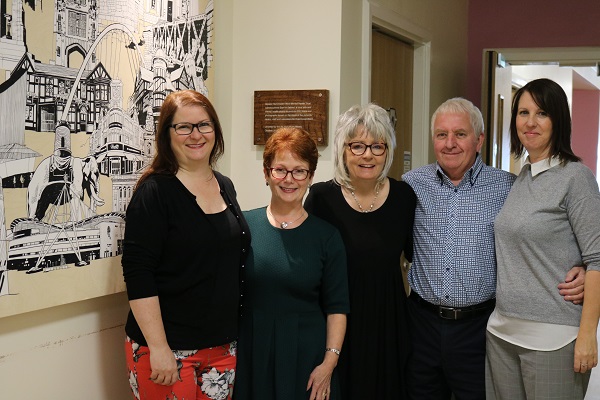 The Trust has invested £4 million into the expansion of Woodlands Hospital, which has included the opening of new ward Hazelwood last year and the modernisation and development of the hospital. The launch of the mural, artwork and reminiscence areas on the main corridor of the hospital and Hazelwood ward is the Trust’s ongoing commitment to improve the environment and the care and wellbeing of people with dementia.

“The artwork and photos helps stimulate our patient’s memories and help them make a valuable connection between past and the present. Staff have already told me that the links to Bolton and Salford has already given patients the opportunity to meet as a group and share stories and experiences, which is immensely therapeutic, not to mention enjoyable.”