The annual RCPsych Awards mark the highest level within psychiatry, and are designed to recognise and reward excellent practice in the field of mental health.

Eight members of the team were presented with their award by Dr Paul Lelliott, Deputy Chief Inspector, Hospitals, (Mental Health) CQC, at a prestigious ceremony held at the College on 6 November 2014.

The team help better support adults with alcohol problems by working with them as soon as they have been admitted to hospital A&E wards. They take referrals from 11 acute hospitals across Greater Manchester and have a 97% successful detox rate for patients admitted to the eight bed ward.

Competition for the RCPsych Awards is extremely tough, and the judging panels were impressed by the quality of this year’s entries. The judges said: “We were really impressed by the RADAR team’s vision and entrepreneurial approach to improving the care of people with alcohol use disorders.  In realising this vision the whole team has shown great energy, commitment and industry. Their innovative and effective service has improved patient outcomes, led to more appropriate use of resources and been positively received by acute hospital consultants.”

Gill Green, Director of Nursing and Operations at Greater Manchester West Mental Health NHS Foundation Trust, said: “Our RADAR ward is the first of its kind in the country and we are hugely proud of the service and the exceptional team who run it. We are so pleased that the team have been recognised for their hard work and won such a high profile award.

“Patients have told us that the service has been a lifeline for them and their families enabling people with alcohol problems to recover from alcohol misuse and, more importantly, stay well. The service wouldn’t be as successful as it is without a strong team, which is so crucial to the care we provide and our reputation as a high performing mental health trust.”

Professor Simon Wessely, President of the Royal College of Psychiatrists, said: “There is considerable concern about the numbers of patients with alcohol-related problems frequently attending A&E departments and requiring admission.  Often the initial reason for the admission is addressed but the underlying cause, the alcohol, is not. This innovative scheme has developed a pathway to rapidly transfer acute presentations requiring alcohol detoxification from acute hospitals in Greater Manchester to a specialist detoxification facility.”

Since it’s opening in November 2012, the RADAR ward has had over 622 admissions. The combined benefits of reducing admissions to acute hospitals and reducing presentations to A&E departments, while addressing the underlying problems for each patient with correct support, has meant that the service has filled a gap that was missing.

There are one in eight NHS beds taken up by alcohol related diseases and 35% of Accident and Emergency cases are alcohol related (with 70% between the hours of midnight and 5am). The RADAR programme has a 97% successful detox rate and 75% of people discharged from the RADAR ward are not admitted to hospital services in the following three months.

Early findings from an independent evaluation by Liverpool John Moores University, has estimated that the service could save the NHS c. £2M based on 80% occupancy at the unit. 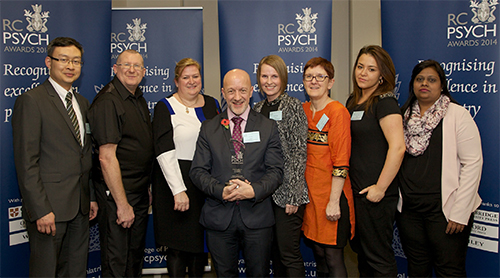