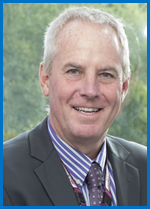 Dr Colgan will step down as Medical Director of GMW today (14 July 2016) after over 25 years with the NHS.

Steve graduated from the University of Manchester in 1982 where he was a Research Fellow for three years. He was appointed as Consultant and Honorary Lecturer in 1991 to the Mental Health Services of Salford. He was appointed as Consultant General Psychiatrist for the City of Salford in 1992, with responsibility for drug services. He became the Lead Consultant for Salford District in 1993 and between 1994 and 1999 chaired the Medical Services Board and the Local Negotiating Committee.

In May 1999 Steve was appointed as the Medical Director for Mental Health Services Salford. He has retained the position ever since, supporting the services through the creation of Bolton, Salford and Trafford NHS Trust in 2003 and onwards to becoming GMW in 2008.

Over his 17 year period as Medical Director, Steve has worked with four Chief Executives – Peter Clarke, Robert Lee, Leslie Boswell and Bev Humphrey and we estimate he has attended around 170 Board meetings and many hundreds more exec team meetings!

Steve has worked tirelessly to improve mental health care for our service users, as well as being an inspirational leader to our clinical staff. With a Masters and Doctorate in Psychological Medicine, Steve has dedicated his time to make significant changes in both research and development becoming integral to GMW’s success.

“Steve has had an outstanding career in the NHS and has made a huge contribution to the success of GMW and its former organisations over the years.

“I have been extremely privileged to have had the opportunity to work closely with Steve over the years and I have benefitted immensely from both his wisdom and his breadth of knowledge.

“We all wish Steve a healthy and happy retirement and offer our sincere thanks to him on behalf of the Board, the staff and service users he has worked so hard to support throughout his long and distinguished career.”

Dr Chris Daly has been appointed as the new Medical Director of GMW with effect from the 1 August 2016.

Dr Daly is a lead consultant psychiatrist and has held a number of senior clinical posts at the organisation over the years.