1 May marked the start of Borderline Personality Disorder Awareness Month in the UK.  The condition is often misunderstood and carries a stigma unlike many other diagnoses.  Around 1/100 people live with the condition and further information is available here: https://buff.ly/2zciKrV

To mark the month, we hope to raise awareness of the issues that those living with personality difficulties experience.  One of our QI priorities within GMMH is to implement the principles of Trauma Informed Care in our services. In essence this means recognising the role of trauma and adversity in the development and maintenance of psychiatric and psychological difficulties and asking people who use our services ‘what’s happened to you’ as opposed to ‘what’s wrong with you’.  People who attract a diagnosis of Borderline Personality Disorder have often experienced trauma and adversity that goes unrecognised as a result of diagnostic ‘overshadowing’ and the stigma associated with this label can result in ongoing traumatisation for people.

Marsha, an expert-by-experience, and Co-chair of the Greater Manchester Personality Disorder Strategy is keen to address the stigma that people living with personality difficulties face.  She discussed this further below:

“On the 21 March Professor Peter Fonagy and I began an important and meaningful conversation which was hosted by my fellow Speaker Collective members. The aim of this conversation was not only to highlight Borderline Personality Disorder (BPD) or the more recent name of Emotional Unstable Personality Disorder more importantly talk about the stigma that is very often associated with this disorder.

“The reason why it was such a momentous day for me is because I got to do it with Peter, who is one of the two co-creators of Mentalization-Based Therapy (MBT) which I can confidentially say is what saved me, not only from myself but also saved my life, which then meant that I could finally be a mum to my son Zack who had used to being the parent in the mother-child relationship. 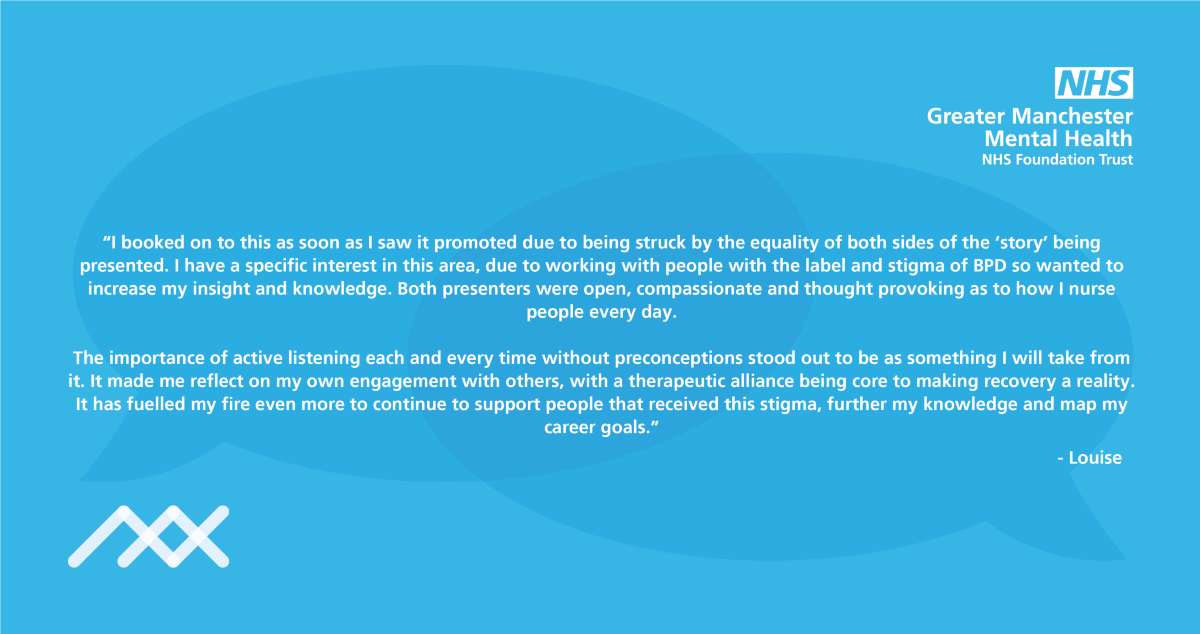 “Together Peter and I wanted to MODEL that not all professionals need to be dismissive when dealing with someone who is in distress, to seeing past them is acting out or percieved as being a drama queen or manipulative , and instead of seeing them as attention seeking but have the attitude of compassion and acceptance as human beings. It doesn’t cost anything to BE NICE and ask yourself why the person in front of is you acting the way that they are and if you show them empathy and compassion you just might be giving them hope. 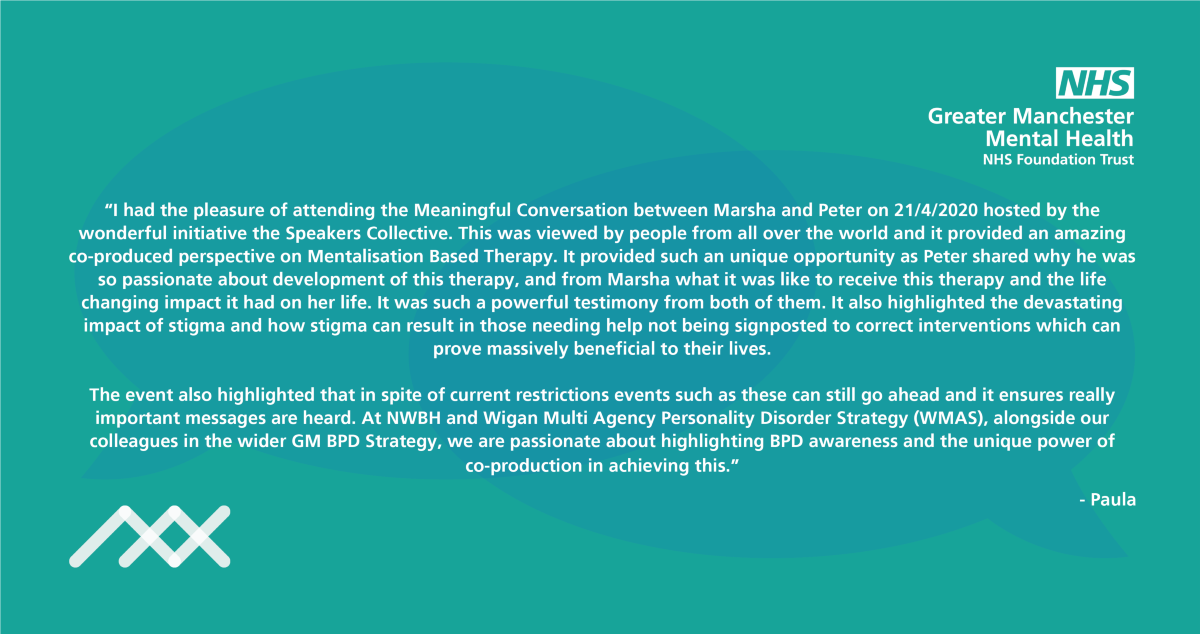 “My life has changed so much since receiving MBT in 2010 so much so that for the last 18 months. I have together with Warren Heppolette who is Executive Lead, Strategy & System Development at GMHSC we have co-chaired the Greater Manchester Personality Disorder Strategy. This group has membership from Experts by Occupation from 42ndStreet, Pennine Care, NWborough and GMMH as well as three Experts by Experience. Together we created iStatements which highlights the Stigma that comes with this label.  We developed specific ‘I Statements’ also for A&E Departments which were then incorporated into Trust Contracts.  We have also collated and developed training material for staff in different settings. We finalised an Improvement Plan which is now in the process of the various MH Trust’s Operation Teams looking at how the Plan can be implemented in the different localities. 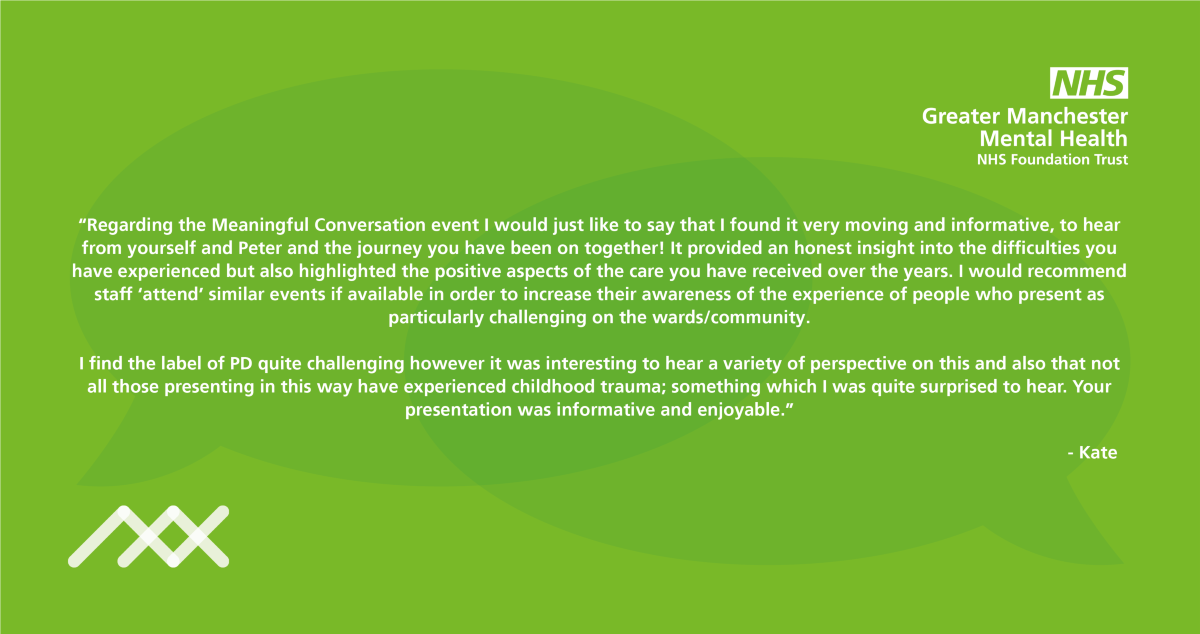 “I am going to be honest and say that I do get frustrated at times with the pace that the Implementation Plan is taking to be rolled out BUT then I have to remind myself that here in Greater Manchester we have a population of 2.8 million people and that for it to be successful it needs to be done in the right way. And while this is being implemented, I thought that the campaign around Stigma and BPD DOES NOT COST A PENNY and can save so much heartache to those living with the persistent distress that I think encompasses BPD. 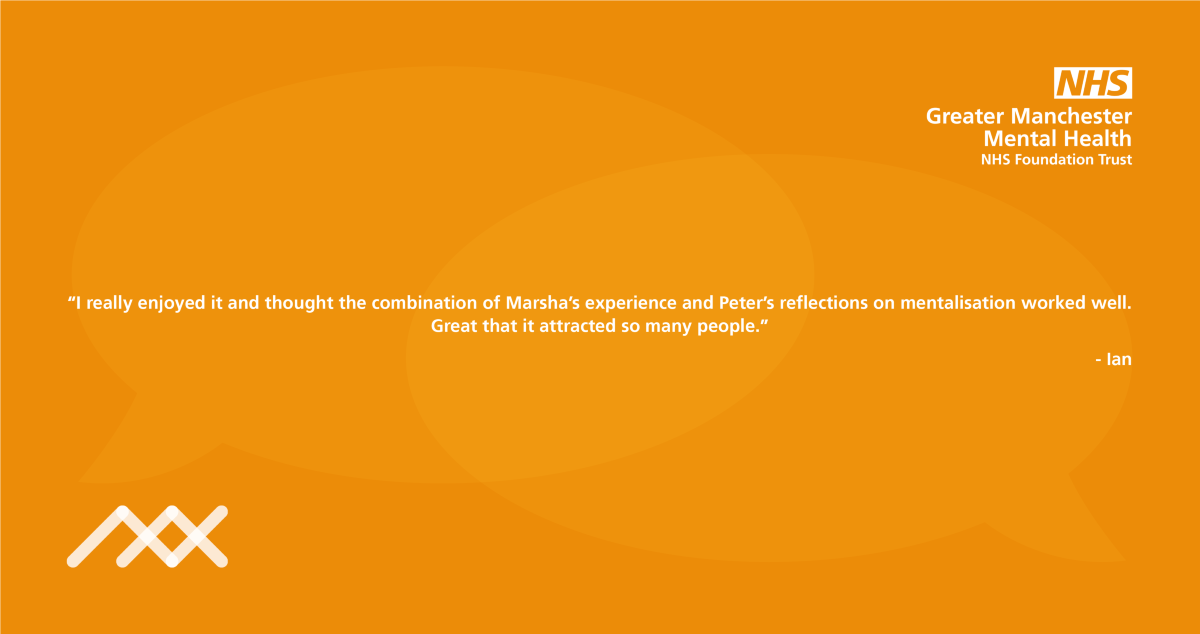 “May is BPD Awareness Month and we are circulating the iStatements please make sure that you read all 10 of them.” 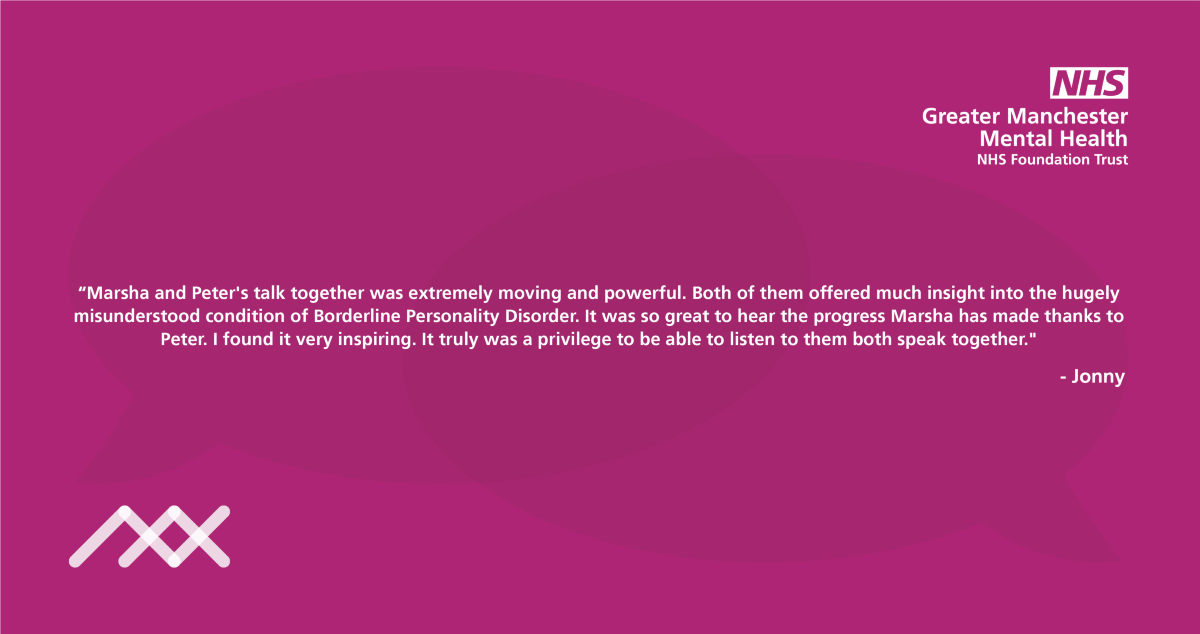