Come along and meet the teams who run mental health, specialist and substance misuse services; see who 'goes the extra mile' in our Staff Value Awards.

Hear from our inspirational guest speakers: 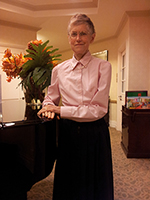 Former nurse and lecturer at the University of Manchester, Dr Ann Johnson became a service user at GMW in 2006.

Ann was honoured with an MBE earlier this year after her tireless campaigning for dementia suffers following her own diagnosis.

This year's event will be held at The Lowry in Salford Quays. The address is as follows:

If you would like to attend this event please book your place by calling the Chief Executive's Office on 0161 772 3622 or emailing imelda.barrington@gmmh.nhs.uk by Wednesday 2nd October 2013.

Seats will be allocated on a first come first service basis so RSVP as soon as possible. Feel free to download the Agenda - Annual Members Meeting 2013 [pdf] 225KB