It is with sadness that we have said goodbye to Alan Maden who has come to the end of his term of office as Chairman for Greater Manchester West. The Trust would like to thank Alan for all his work and wish him all the best in his retirement. 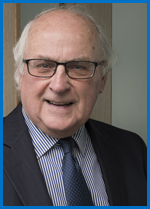 Today I step down as Chair of Greater Manchester West Mental Health NHS Foundation Trust (GMW). I depart with great optimism for the organisation’s future.

I was appointed Chairman of GMW in September 2008, and I have to say what an honour it has been. But after 11 years with the organisation, first as a Non-Executive Director then as Chair, I am ready to retire.

During my eight years as Chair, I was fortunate to have worked with an outstanding Chief Executive, Bev Humphrey, who has given me great support during my tenure and without whom I wouldn’t have been able to carry out my role.

The Board, Council of Governors and Executive Team have provided wise counsel, strategic direction and non-executive scrutiny. I salute them all and give them my thanks.

I have also been guided by the wider GMW team who have inspired me with their knowledge, expertise, commitment and enthusiasm. I believe that, together, we have delivered significant achievements for the people under our care.

I am incredibly proud of how the organisation has evolved since it gained Foundation Trust status in 2008. We have made great strides.

I have had the opportunity to meet many of you as members, governors, tutors, employees, patients, service users, carers or volunteers either on my travel throughout the Trust’s extended reach or here in Prestwich.

I would like to thank each and every member of staff for your dedication, passion and hard work - without people like you, we would not be the high-achieving Trust we are. It is has been a privilege to see what excellent work you are doing and the difference you are making.

I wish GMW, and my successor as Chairperson, every success for the future.

With my best wishes,