Psychosis is a term used to describe a condition where somebody is unable to distinguish between reality and their imagination.

Psychosis is not a diagnosis in itself but a term that refers to the presence of certain distressing experiences such as hallucinations, delusions or disorganised speech.

Essentially it involves a difficulty in distinguishing between reality and unreality. In the UK each year, approximately 7500 people have a first episode of psychosis and this usually occurs in young people (80% aged between 16-30 years of age).

It can have a huge impact on somebody’s life, affecting their relationships and ability to function at work or college. It is also distressing for family members.  Therefore, it is really important that people get the right help as soon as possible.

There are many different theories about what causes psychosis, but essentially it is likely to be a combination of factors that contribute to the development of it. These include biological, societal and psychological factors. For instance, drug use, stress, and trauma have all been shown to play some role. But each person is unique with their own life history and different things may have contributed to them experiencing psychosis.

What are the symptoms?

The symptoms of psychosis include hallucinations and delusions. Hallucinations can be heard, seen or felt.  Hearing voices is very common in people with psychosis.

Delusions is a psychiatric term and refers to when people have unusual beliefs that are not considered to be ‘reality based’ and shared by the rest of society. These are often negative or threatening for example believing that others are out to harm you or that you are being watched or followed. Understandably, when you believe this you feel very paranoid and anxious and you behave very differently than you usually would.

Another example would include believing that your thoughts are being put into your mind by something external (e.g. by a person that wants to harm you in some way). Although the content of somebody’s psychotic experiences may appear odd or unusual it is often linked to their life experiences and makes sense in that context.

What are the different types of psychosis?

There are a number of diagnoses that involve the presence of psychotic symptoms. These include schizophrenia, schizoaffective disorder, and some bi-polar diagnoses.

How is it treated?

Although psychosis can have a huge impact on somebody’s life it does not mean they cannot recover from it. There are lots of people who have an episode of psychosis and fully recover and get back to their original level of functioning.

Services have become much more recovery focused since the introduction of dedicated Early Intervention Teams, like the ones GMMH has in Bolton, Salford and Trafford, who specifically work with young people (aged 14 - 35) who have a first episode psychosis.

Interventions include medication, cognitive behavioural therapy, family intervention, and social interventions. People usually receive a whole package of care with a range of these interventions to help facilitate their recovery.

What can someone do if they think a family member or friend has psychosis?

It is really important to talk to the person and be supportive. This can be difficult as often people are distressed and worried about telling anyone as they fear they are going ‘mad’ and they may be taken into hospital.

We know from research that once somebody has a psychotic episode the earlier they receive treatment the better the outcome and chances of a full recovery. Seeing your GP to access a referral to one of the Early Interventions Teams (EI) would be advisable but many of the EI teams take direct referrals from clients.

In Salford we also have an Early Detection and Intervention Team (EDIT) in primary care. EDIT are a preventative service, for young people (aged 14-35) who are at ultra-high risk of developing psychosis.

EDIT offer specialist assessment to see if a young person is at ‘high risk’ and offer cognitive therapy with the aim of preventing them from going on to have a first episode psychosis. We know from research that in the year before a young person has a first episode psychosis, that they experience many changes in their thoughts, emotions and behaviour.

Intervening at this very early stage has been shown to be effective at preventing a first episode psychosis. EDIT take referrals from a wide range of services (GP’s, voluntary sector etc.) and they also take self-referrals.

Right from the Start booklet 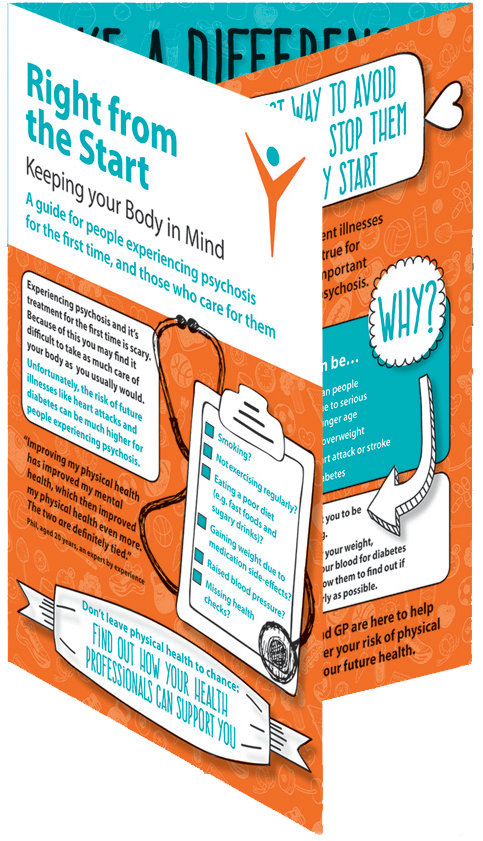 This booklet has been produced to help young people experiencing psychosis for the first time look after their physical health and maintain a healthy lifestyle.

You will find it useful if you are affected by psychosis or if you have a friend of family member who is affected.

If you would like to be posted a copy, please contact the Psychosis Research Unit on Tel: 0161 358 1395 or email: info@psychosisresearch.com.