We understand that you might be worried about coronavirus – also known as COVID-19 – particularly if your child has a long-term health condition. It is normal to feel more anxious given that these are abnormal circumstances.

Here is a downloadable guide on supporting your children through this time:  COVID19 how to support your children.pdf

Check how much information helps to feel informed and when it is better to switch off. Limiting media time can help to not feel overwhelmed

Useful Information about Pregnancy and Covid-19

Please find services and support for young people (from 11 years to 35 years):

To receive weekly support from one of their workers just register at... onlinesupport.42ndstreet.org.uk 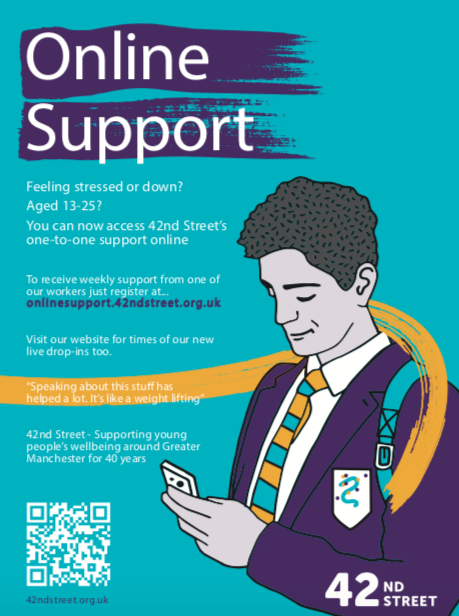 Kooth is for young people aged 11-18 and offers a variety of resources, including:

Kooth provides information and support along with treatment for children and young people with a range of mental health problems. Scheduled and drop in counselling sessions are available 365 days a year and include slots at evenings and weekends.

It has been available in Bolton, Manchester, Oldham, Trafford, Rochdale and Wigan for some time and has now been rolled out to cover Bury, Salford, Tameside and Stockport. This expansion has been brought forward in response to the COVID-19 outbreak.

The following information has been collated by the 'Ireland, UK and The Islands LGBT+ Youth Work Network'.  It details the support services available to all LGBT+ children and young people at the current time:

Support available to young people (under the age of 35) who are at risk of suicide.  They operate ‘Hopeline UK’ to give people a safe space to talk through anything happening which could be impacting on a persons’ ability to stay safe. The phone line is for:

Art with Heart is an arts organisation based in Salford, Greater Manchester, who created and produced Declaration, a show about Creative Director Sarah’s road to ADHD diagnosis, which toured the UK in 2017 and again in 2018. The show received critical acclaim, “by bringing the challenges of ADHD to the stage so vividly, Art with Heart are single-handedly widening our understanding of one of the most misunderstood mental health issues out there” Rory Bremner, comedian and impressionist.

Now Art with Heart has developed Squirrel Club, a digital creative workshop for young people 8+ to personify their ADHD by creating a character, helping them to express key characteristics around their diagnosis and reframe them in a positive way. The workshop was originally developed as an in-person experience, which ran alongside the tour of Declaration and helped young people to communicate the symptoms of their ADHD, “The ADHD workshop Art with Heart ran for the young people at ADHD Norfolk had a huge impact. We had a mother in tears because her son went into the workshop hating ADHD and came out at the end loving it.” Andrea Bell, founder of ADHD Norfolk.

Squirrel Club has been reimagined for the pandemic, allowing participants to engage with the project from home. To attend, parents and carers simply need to sign up to the event (link below) to receive a downloadable video with activities that can be completed in their own time. After completing the activities, they can book onto a Zoom with Sarah for the chance to explore their character and what it means in relation to their ADHD – valuable for both the young person and parent/carer.

The video has been created to work flexibly for participants and includes a guide for parents/carers, so they can inform themselves on what to expect before beginning the session. There are clear pause points throughout the video, allowing the young person to participate at their own pace. Presented by Sarah, the video includes a set of friendly and engaging squirrel animations, creating a fun experience with tasks that can help young people to communicate about their ADHD.

Parents/carers can sign up to Squirrel Club now, and book follow up calls throughout November and December.

Sarah Emmott, Creative Director, says: “when I was learning to talk about my ADHD, I found that creating a character was a clear way to communicate my symptoms in a way that other people understood. Squirrel Club is a chance for young people to develop a similar way of communicating, helping them to reframe their ADHD and hopefully serve them long into the future. It also helps parents and carers to understand their young person’s ADHD better.”

Support services for the under 25’s. They aim to become the first point of contact for any young person seeking help or information on any subject wherever and whenever they need it.

They can offer guidance around:

They have online discussion boards www.themix.org.uk and young people can email them through the website.